Upon graduation from high school, Pvt. Alvarez enlisted in the United States Marine Corps. He recently graduated from boot camp at the Marine Corps Recruit Depot at Parris Island, South Carolina. Pvt. Alvarez is currently attending military training camp at Camp Geiger in Jacksonville, NC. From there, he will proceed to the Marine Corps Communication-Electronics School in Twentynine Palms, California.

Pvt. Alvarez was nominated by his mother, Ana Maria Sanin.

“It was a surprise when Nicolas shared his interest in joining the Marines. To be truly honest, I did not want this path for him. The thought of him being part of the U.S. military never even crossed my mind. As both a teenaged and single mother, it makes me immensely proud to see my son not only become part of something bigger than him, but also accomplish the mental toughness the Marines training requires. Today, I am a proud mom of a U.S. Marine and I look forward to what the future holds for him. I have no doubt that he can accomplish anything he puts his mind to.” 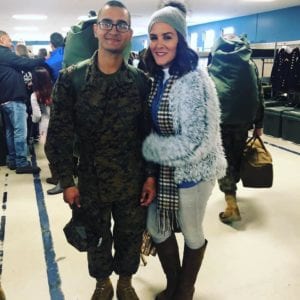 Selected NFM Salutes may choose from one of the following three non-profits: Platoon 22, AnySoldier, and the Gary Sinise Foundation. Pvt. Alvarez chose Any Soldier to receive this month’s donation. NFM looks forward to the opportunity to continue to honor military and Veterans through the NFM Salute initiative.

NFM Lending is a mortgage lending company currently licensed in 35 states in the U.S. The company was founded in Baltimore, Maryland in 1998 and this year is celebrating its 20th anniversary. They attribute their success in the mortgage industry to their steadfast commitment to customers and the community. NFM Lending has firmly planted itself in the home loan marketplace as “America’s Common Sense Residential Mortgage Lender.™” For more information about NFM Lending, visit www.nfmlending.com, like our Facebook page, or follow us on Twitter.