LTC Evans attended West Point, graduating in 2000. Her first duty station was Fort Hood, Texas, where she was commissioned as an Army engineer officer. After serving in the 1st Cavalry Division’s 20th Engineer Battalion for 5 years, LTC Evans decided to leave the Army and join the Florida National Guard. This decision allowed her to pursue engineering while keeping involved in the military for the next 11 years.

During her time in the National Guard, LTC Evans commanded an engineering company and led 300 missions in the combat zone during Operation Iraqi Freedom II in Baghdad, Iraq. In 2016, she deployed to Central America for a six-month long training mission. She commanded another task force comprised of 400 soldiers throughout three countries. The task force partnered with military forces and police, training them to recognize and fight back against human trafficking and drugs.

After 19 years of service, LTC Evans founded E2 Design and Construction in March 2017. Remaining active in supporting her community and country, she is serves on several non-profit boards, including the West Point Society of North Florida as President. She also led relief efforts in the Florida Keys during Hurricane Irma in September 2017.

LTC Evans was nominated by her friend and loan originator, Elysia Stobbe.

“Gratefully, a large portion of my clients at NFM Lending are in the military. I am privileged to be able to help many Veterans and soldiers currently serving our country. During my work with them, I am sometimes able to get a glimpse of their personal and professional lives and how they contribute to our world for the betterment of all of us. No one stands out to me more than the dynamic, driven, and humble Elizabeth Evans. I am honored to be able to nominate her for the NFM Salute.” 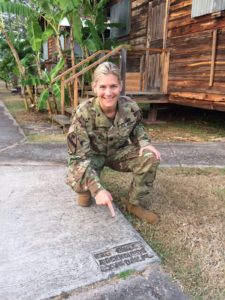 Selected NFM Salutes may choose from one of the following three non-profits: Platoon 22, AnySoldier, and the Gary Sinise Foundation. LTC Evans chose Platoon 22 to receive this month’s donation, explaining that “losing soldiers to suicide is one of the most heart wrenching ways to lose a fellow brother or sister in arms.” NFM looks forward to the opportunity to continue to honor military and Veterans through the NFM Salute initiative.